Artichokes: Worth It!
Friend That Cooks
Personal Chef Service

Cleaning Artichokes For Stuffing and Steaming 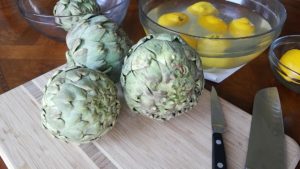 Artichokes are one of the more underutilized vegetables in the produce isle. They for sure do not scream “Eat me! I'm delicious!” with all of those thorns, tough, bitter, outer armor and hairy insides. But once you get down to the sweet delicious meat, we promise the effort will be worth it! Sure, you can buy a can of artichoke hearts for $4 a can. And that's all fine and well for a seafood pasta or pizza topping. But nothing says summer like a stuffed artichoke and a cold can of beer (or a glass of rose, we're not judging.) Getting them ready, though, that takes some finesse. So, we broke it down for you in the handy step-by-step guide. The stuffing? That's all you! Use whatever you want. But for the best combos, we recommend a little cheese, breadcrumbs and herbs. Crab, shrimp or even white beans would also taste delicious.

First: You gotta buy the artichokes. Look for ones that are heavy for their size with tight, green leaves. Some brown spots are ok. 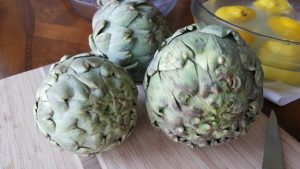 Select globes that are heavy with tight leaves.
Second: This is where the prep starts. Remember the 80/20 rule? This is definitely a situation where being prepared pays off in the end. You will need: a large cutting board, kitchen sheers or scissors, a sturdy and SHARP chef's knife, a large soup spoon, a large bowl for scraps, a parchment lined sheet pan (or a steamer basket on the stove top) and your stuffing. Third: Tear off the bottom leaves from the stem of the artichokes. Next, using your sheers, cut just the tip off the leaves working in a circular pattern all the way around the artichoke, removing the thorns. It works well to hold the artichoke over the scrap bowl, so the leaves fall right in. Makes for easier clean-up. Then, turn the artichoke on it's side and using your chef's knife, slice off the top third of the choke, exposing the purple flower center. You can also remove the stem now. The leaves are tough, so be careful and use your knife in a sawing-like motion to make the cut. Don't try to push straight down…that won't do anything except bruise the leaves and hurt your shoulder! 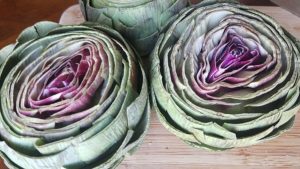 Remove the top third to expose the flower and choke center.
Fourth: Take out the choke. The purple center is actually the flower of the plant. If left alone, the artichokes would bloom and drop its seeds. Underneath the soft purple leaves is the center, or the choke. It is full of fine, hair-like seed pods that float in the air after the plant blooms. They are not very tasty and do not have a good mouth-feel, so they gotta go. Plus, we need to make room for the stuffing! The easiest way is to use the side of a large soup spoon. Work the edge of the spoon under the little hairs and scrape them out, exposing the edible choke, aka “meat”, underneath. Again, work over a scrap bowl for easier clean-up. Fifth: Stuff it, bake it and eat it! Or don't stuff it. Either way, it's delicious! They can be baked on a sheet pan in a 375 degree oven for about 15 minutes, or steamed on the stovetop. Use the tip of a paring knife thru the stem end to check for doneness. When it inserts easily, they are cooked thru. To eat, pull off a leaf and scrape it against your teeth to remove the meat. Don't eat the green leaf. No amount of cheese could ever make those tasty! (If you are not stuffing them, dip the choke end of the leaf in clarified butter for extra deliciousness.) When the leaves have all been picked, the tasty sweet choke heart is left behind and up for grabs!   You can keep the choke centers and use them for other recipes or eat them plain. To clean the artichoke all the way down to the choke center, have a bowl of acidulated water off to the side and then follow steps one thru three above, but keep the stem attached as there is good meat inside. Remove the outer leaves using a chef's knife, working in a circular pattern around the artichoke. 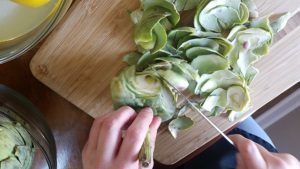 Remove the tough outer leaves to expose the tender choke heart.
Leave the hairy choke attached while you do this to keep the center from oxidizing. Once the outer leaves have been removed, rub the choke center with ½ a lemon to stop the oxidation process. 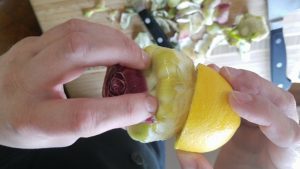 Rub with lemon to prevent oxidation.
Next, follow step four to remove the hairy choke and drop immediately into the acidulated water while you work on the others. Work quickly as they will brown quickly from the air. The now clean artichoke hearts can be steamed, fried, roasted, sautéed or grilled and used in hundreds of different recipes! Click the link below to get some recipe ideas from delish.com! https://www.delish.com/cooking/g950/artichoke-recipes/
No comments posted...
Top