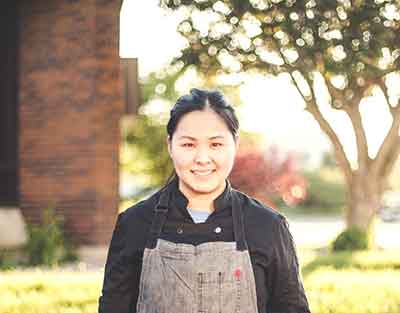 In our Chef Spotlight this month

...we introduce you to Pha Le, a Friend That Cooks personal chef servicing clients in Chicago, IL. Pha Le was born in Vietnam and grew up in Nebraska, Texas, and now resides in Chicago, IL. After graduating from high school in Houston, Texas, she decided to go straight to culinary school. Wanting to stay close to home, she attended the Art Institute of Houston. While attending culinary school, she did her internship at St. Regis Hotel in Houston, Texas and stayed after earning her degree to further her understanding of hospitality. Her culinary background in Houston includes Haven Restaurant, which was the 1st certified “Green” restaurant that she helped open for Randy Evans, (formerly Brennan's & Commander's Palace, Louisiana). She also helped open Hendricks Deli & Grill and later became the sous chef before moving to Chicago to further her culinary repertoire. With Haven being such a “green” restaurant, vegetables and herbs were grown and harvested on site. She was able to learn and understand farm to table dining and the true meaning of “cook what you can grow”. This inspired her to learn and mix finesse from fine dining and local ingredients while still maintaining integrity and utilizing each ingredient to its full potential. That kick started her decision to move to Chicago where there's so much opportunity and back to her midwestern roots. While in Chicago she worked at Paul Kahan's Blackbird restaurant as a line cook before leaving to work at the legendary Pump Room conceptualized by Jean-George Vongerichten at The Public Hotel as a Sous Chef. During both times, she was able to learn more about Midwestern ingredients, farmers, and local purveyors. She was able to establish a rapport and push their products and businesses and the knowledge of farm to fork. Farm to fork really cemented when she left the Pump Room and went to work for Nicole Pederson at Found Restaurant as her Executive Sous Chef. During her 3-year duration, there were multiple field trips for back-of-house and front-of-house employees to farms to learn about where the products came from. She enjoyed making last minute specials based on ingredient availability, changed the menu every two to three months based on seasonality, and worked with local purveyors to see the smile on their faces when a restaurant supported their life's work. Pha continues her passion for using local, fresh and seasonal ingredients with her menus for her Friend That Cooks clients. She has been with FTC since October of 2015. Watch our Chef Spotlight every month to learn about another Friend That Cooks personal chef. Visit www.friendthatcooks.com to learn more about weekly meal prep from Friend That Cooks.
No comments posted...
Top