The Art of Braising Meat
We get asked all of the time, “what's your secret to cooking great tasting meat?”, so we decided to give you a little how-to guide to braising meat so you can rock dinner. This tutorial is about braising which is a low and slow kind of cooking method. For grilling, stay tuned, we will cover that in a different newsletter. This is also a general guideline and not a specific recipe. There are an infinite number of combinations of meat, aromatics and liquids out there. To list them all out be impossible. If you are thinking, “what kind?” or “how much?” of any ingredient mentioned, send us an email and we can give you some ideas. The pictures you see here are of a 4lb beef brisket. The fat cap (or fat layer) is on the underside to better show you how it was seasoned. Also, before searing, it was cut in half to better fit in the Dutch oven. More on that later.

Step One: Buy some meat 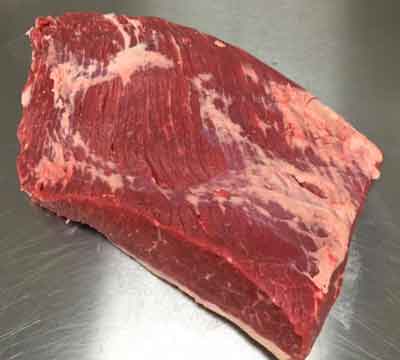 Whether it's beef, pork, lamb or other, it doesn't really matter. The principles are the same. But, quality does. Make sure you are buying your meat from someone you trust. Avoiding previously frozen meat matters too. Without getting too science-nerd on ya, when you freeze anything, the water molecules within the cell walls freeze too. And what happens to water when it freezes? It expands and breaks down the cell walls, which in turn can make for a mushier texture. Great for bananas in banana bread. Not so great for a piece of meat. That's not to say you can't use frozen meat. Just make sure it was frozen properly, and take the time to thaw it out properly- in the fridge for a day or two. Quality also means grade. Budget determines quality grade, mostly. If you have a few extra bucks to spend, get Prime. Choice is the best choice for the dollar…(see what I did there?!) You spend a little less, and still get great quality. Select is the lowest grade you can buy at the store. Unless you are pinching pennies, I don't recommend getting it. It's really not worth it. So just buy Choice. 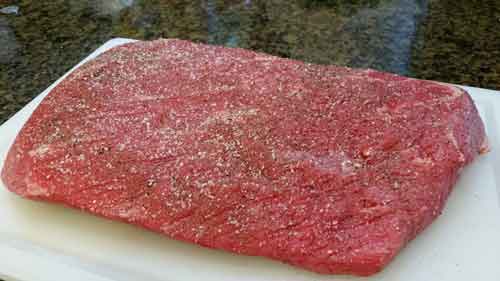 You don't want to go straight from the fridge to the stove. Ever. Again…science. Let your meat rest at room temperature for about 30 minutes to an hour. “OMG! Won't I get sick if I leave my meat out that long?” NO! You won't. Unless you left it in your hot car for an hour after you got home, it's probably going to be fine. Just be smart. Remove any extra fat or silver skin that wasn't removed by the butcher. I don't mean remove all the fat. You need some to make the meat not suck. But too much and your meat will be greasy. You want a nice 1/8 inch layer. And there should be some marbling. That's why you bought Choice, remember. (Fat carries flavor, so leaner cuts tend to have less flavor.) Pat the piece of meat dry with a paper towel or two. This removes any extra moisture from the surface of the meat. SEASON YOUR MEAT BEFORE YOU COOK IT*!!!! This may be the most important step. Unless you have a medical condition that prohibits you from consuming salt, season your meat with salt. Most of us at FTC prefer Kosher salt, but you can use whatever you want. And pepper. Use pepper. Sprinkle all sides of the meat with a layer of salt and pepper. It's not just for flavor. Also, science.

This is the stuff that makes the meat taste really good. Things like herbs (remember that disclaimer about infinite number of possibilities), sliced onion, chopped garlic, shallots, carrots, celery, etc. You don't need a lot of it. Half an onion, 2-3 cloves of garlic, a handful of herbs (dried or fresh) a carrot and a celery stalk will do just fine for a 4lb roast. You also need a liquid and some acid. Tomato, red wine, beer, and cider all work well as an acid. You will need about ½-1 cup of acid. Broth, stock and juice are fine liquids. Basically, you need something that tastes better than water. About 2 cups should suffice.

The oven should already be on and preheating to between 275 and 325 degrees, depending on the meat. But first, we must sear the meat. That takes a high heat source. You will want to use a heavy Dutch oven or stock pot, something with an oven safe lid. We don't want to wash a lot of dishes at the end of this, so try to use only one pan. But if you don't have one, you can sear in a skillet and transfer to a roasting pan. Get the pan hot. Not rip roaring, call the fire department hot. But hot. You are going to put a big hunk of meat in the pan that is going to suck up all the heat in a short amount of time. If when you put a small amount of oil in the pan, it begins to smoke, the pan is too hot. Remove from heat, wipe out the pan, and try again. The trick is to get the pan hot enough that when you put the meat in, it stays hot and continues to caramelize the outside of the meat, but doesn't burn down your house. And this is one case where the size of the meat matters. You need a pan that is big enough to house the meat comfortably. 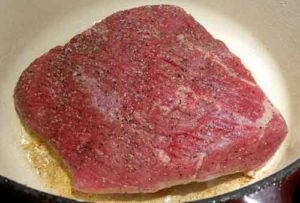 Add a small amount of oil to the pan, just enough that when you swirl the pan around the oil covers the bottom of the pan. And quickly it should start to shimmer. That means it's ready. Carefully add your meat and let it sit. You will be tempted to check it. Don't. Every time you lift the meat surface from the pan, it stops cooking. So just trust us and leave it. This is called caramelization. It is a science word that means good tasting meat. After a couple of minutes, you should start to see the meat turn a beautiful golden or dark brown around the edges. Now would be a good time to check. 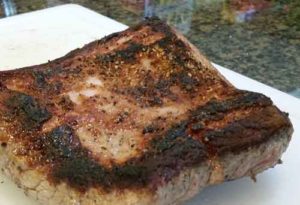 If it has turned said GBD (golden brown delicious) color, flip the meat and repeat on all sides, until you have a nice crust around the entire outside. Remove the meat from the pan and set aside. Turn down the heat a skosh, add the aromatics and stir them around a bit until they start to release their juices*. Then add the liquids and scrape up any cooked-on bits from the bottom of the pan. Return the meat to the pan (or to the roasting pan if using a separate pan for the oven with the aromatics and liquid), transfer to the oven (covered) and let the meat cook until it is tender. For a 4 lb beef chuck roast, that is about 3 hours.

Step Six: Serve the meat, and take a pic for Instagram

Because that's what we all do now, right? 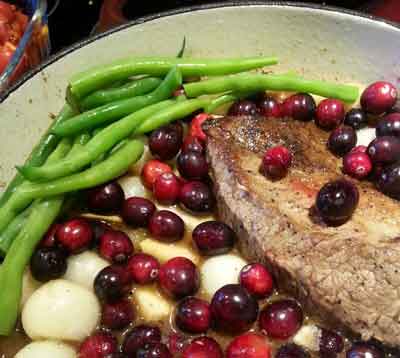 *If you want to use the braising liquid as a sauce, you will want to thicken it. Either, dust the meat with a light coating of flour after seasoning with salt and pepper, or add a heaping tablespoon of flour just after adding the aromatics, and before adding the liquid. Either way, there will be enough flour molecules to thicken the sauce while it cooks. **If you have an allergy or sensitivity to gluten or just don't like it, don't use flour. There are other products out there that can be used as a thickener, but most should be added at the end of the cooking process. Email us if you have a specific question.
No comments posted...
Top